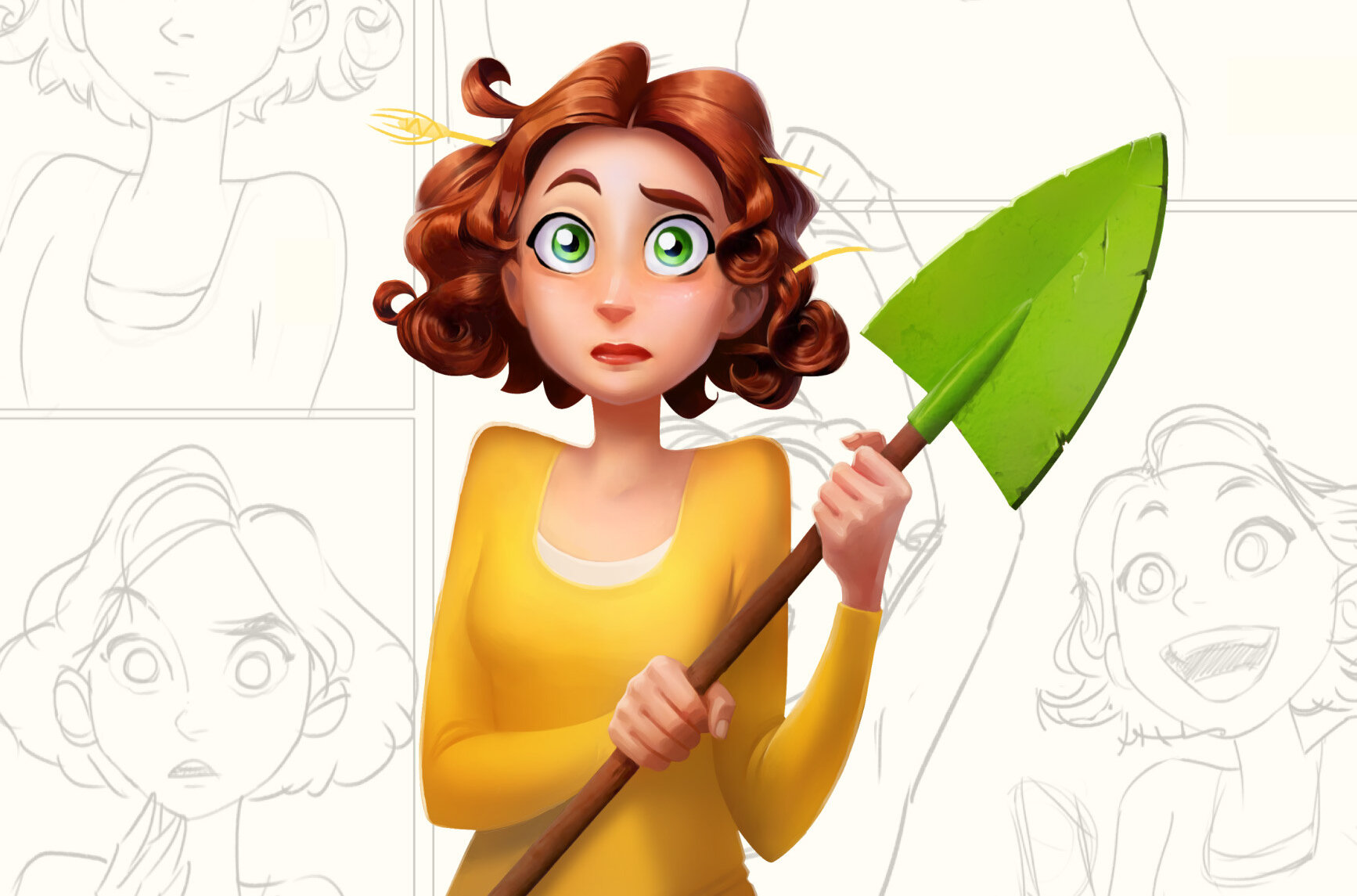 In a nutshell: How Merge Mansion’s game art evolves from first sketches to final assets

Creating first game art drafts is the moment when an idea of a mobile game starts to come alive. To turn drafts into highly captivating visuals is a long and iterative journey. When this process started for Merge Mansion, the team tried out a number of different styles at first. Katja Louhio, one of Merge Mansion’s game artists, takes you through the process.

“Testing the theme comes first. In the beginning, we started to make a fantasy-themed game and only later shifted towards the current mansion theme”, Katja says.

The team of three artists created a huge amount of different concepts, art styles and visual themes. Katja says it was “a lot of fun but also a lot of hard work” and gives a concrete example about character art:

“At first, our main character was a fantasy princess with pink hair. Later, she turned into a cartoonish girl with blue hair. Eventually, we drew the ‘final’ Maddie – the red-headed lead lady of Merge Mansion.”

After testing which theme resonates the most – and sticking to the mansion theme as a result – Katja and the rest of the team started to iterate the artwork for the environment and the merge items. The team worked on the assets with Blender for as long as possible.

“Painting items from various different angles in 2D takes a lot of time. That’s why we made our 3D models as finished as possible, and only then gave them some texture”, Katja explains.

Keeping the 2D work light also allowed artists to do even big changes in later stages of the process. It’s more of a rule than an exception that changes will be needed.

“We needed the freedom to turn the objects around easily. We had to find the optimal angle that would not only fill the square space in the grid but also look good and be easily identifiable for the player. That calls for some iteration”, Katja says.

When the assets – or parts of them – were ready, they were taken either straight to Unity or to Spine 2D for animating. As Merge Mansion is scaling faster and faster, Metacore has started to outsource some of its artwork, giving Katja and other artists time to concentrate more on animations.

Feedback for the win

Metacore’s workflow involves plenty of feedback. The game artists prefer getting something on the page and sharing a rough sketch quickly, rather than polishing their work before showing it to others.

“It’s better to ask for feedback early on instead of finishing an asset that will have major flaws later”, Katja says, and further highlights the importance of feedback especially in early stages:

“During the first stages of game art, we do a lot of rough sketches on the basic shape, colour and composition in addition to the purpose of the item or the area. This is when the value of feedback peaks. After addressing it and fixing problems in the sketch phase, we move straight to either creating the assets or making a more refined sketch”, Katja explains.

The artist team encourages each other to say their opinions about the sketches and they iterate as long as it takes for everyone to agree. The team doesn’t have an art director or a lead artist, which makes open communication and feedback crucial.

“All of us have a pretty good sense of what is needed. We work as a team to give and receive guidance and we have a nice atmosphere when it comes to feedback. It’s always given with the end result in mind – helping to improve the artwork and make it fit into the game”, Katja adds.

Metacore is eagerly waiting for new team members to join: check out our open positions for a 2D Game Artist and a Senior Game Artist.